Another entry with Meerkat Majors, with a small change: Lóránt Perjéssy took up the mantle of programming, hence the top hat on the meerkat on the right. The theme was “It’s too cold outside”, and we made a Star Wars parody, where during a space battle two opposing animals crash land on an icy planet, and they compete for their very lives. 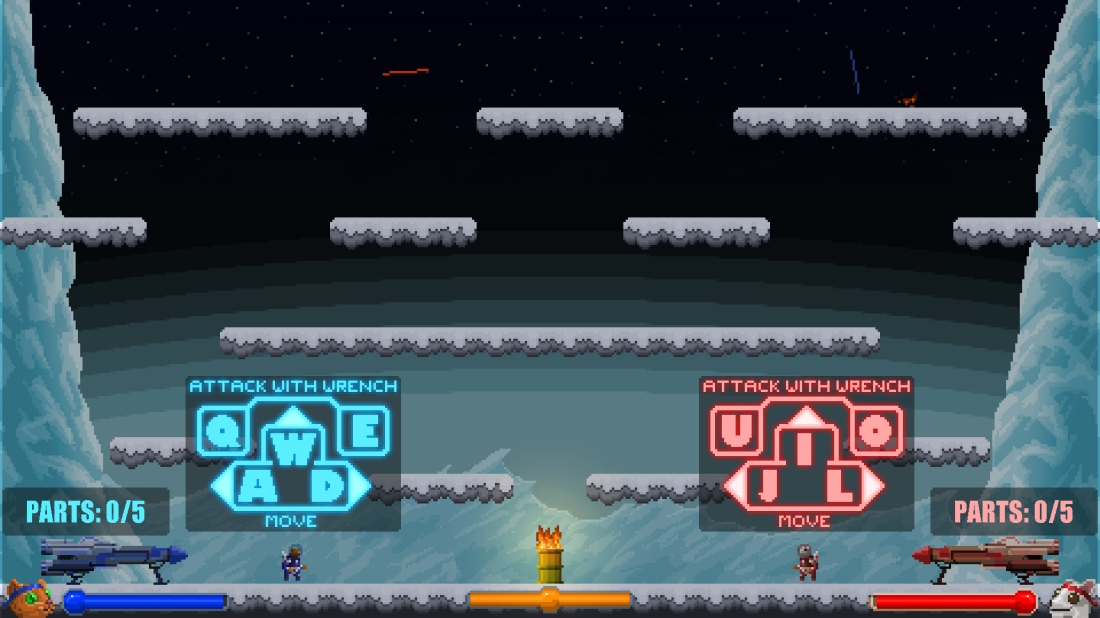 The goal is to collect 5 engine pieces for the corresponding ship (red player to red ship, blue player to blue ship) and then a fuel can before the other player. Both players have a body heat meter which can be replenished only near the fire in the middle bottom. But the fire is also depleting, so time to time a fuel can has to be sacrificed to keep the fire alive. If the fire extinguishes, both players lose. If one’s body heat reaches zero, the character turns into an ice cube, and the player has to nudge it near the fire to thaw.

On the map new items spawn from time to time: engine parts, fuel cans, wrenches to repair… no, to smack the other player, and speed capsules to give some extra speed boost. If a player collects 5 parts and a can, he or she wins the round.

We also made a neat intro (we finished it later), which plays before the game. We also plan to polish the game a bit and release it. We want to add more level variety, implement a sort of teleport door which opens time to time and transport a player to the opposite end of the screen. We also fixed a bug that made the tutorial screen disappear after 5 seconds after starting the program – and not after starting the actual game. We came out 5th place in the competition.