In this march the 6th, Gameloft had another inhouse game jam. I wasn’t participating in the last two, so I was excited about it. No one got sick, we had two coders with Attila Ács and his brother Balázs. Though Megsz (Gábor Megellai) wasn’t able to make it Levente Seres jumped in to the designer position. So with me pushing out the art we have a four member team under a new flag: DTR.

The theme was announced at 4:00 pm as usual and immediately we started to throw around ideas, what HUNTING GROUNDS mean. Amongst the idea of a piece of ground hunting dwarves, and a ghosthunter collecting ghosts on a haunting ground (:D) we decided that these ideas wasn’t good. A metroidvania style with upgrading elements for the ground, and hunting ghosts is too much for two days. Collecting ghosts not too original, ghost hunting people with warious skills is too much again (and in the end something similar was made by another team). There was an idea for a beat them up game, where a Rambo-deer beats up hunters in the forest… At least I showed the guys a game called Bleak Sword (I only know the trailer video, haven’t played the game itself). The idea is to have a monster hunter, who have to kill monsters, and collect three runestones, to unveil the evil entity behind the monster infestation. Not too much, enough for two days. 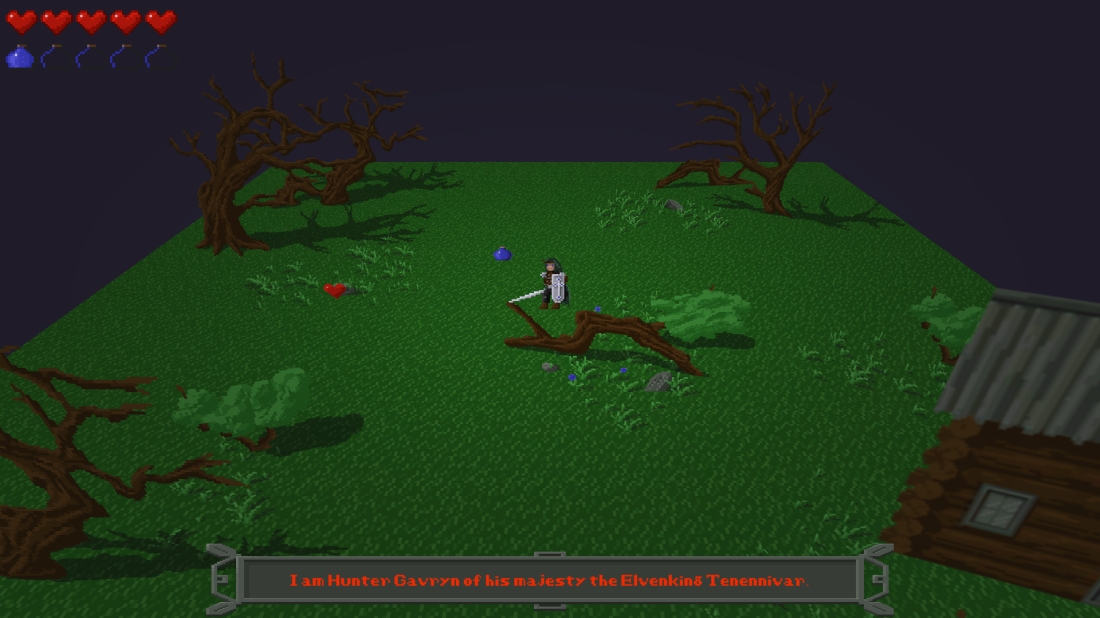 We decided on the skills. The character can walk around, attack, block and use magic. I pushed out whatever graphics I could, I slept so little at the weekend. My creative juice was down at Sunday morning and that shows on the boss and the non existing title (and I love to make titles). I also recorded the sounds, I smashed sword and sharpener together, I smashed a pillow with it, made noises for the enemies and for the boss. As no one is capable of composing music, I just put some random music in the game (from Serious Sam).

All in all we can be very satisfied with the result, though there are bugs and missing stuff. I hardly see mana potion loot from monsters, glyphs not always drops so we had to place them on the leveles, I did draw arrows to show where player can go, but was no time to implement, and no title at all ingame and the font we used has a faulty letter “g”.

This game as it is will be left alone, it was a game jam game, was fun and hard to make. I brought home the art I made, and maybe I will re-imagine it and start a new project around it in Game Maker, as this was made in Unity.